The Allied powers are a confederation of democratic powers concerned about the rise of extreeme right wing governments in the centre of Europe. At the core the old enemies France and Great Britian have continued to put asside their differences in the face of a belligerent united Germany. However in many ways the legacy of the Great War is still present twenty years on in late 1930s Europe. French shock at the horrific losses they suffered has led to a belief in technology over elan and warrior zeal. The huge modern defensive works alongside the German and Italian borders put paid to any fears of a direct German assault while advanced and expensive tanks form the core of the high tech French army. The British are just as keen to use new technology to diminish casualties but their most pressing issue is the impact of the Great Depression on military budgets. To save money modern tank designs emphasise cheapness over technological advance while even the once mighty Royal Navy is a shadow of its former self.


While it is wrong to call these two great powers paper tigers, their theoretical strength is much greater than their real military capabilities on the ground. However they are joined by a large coalition of likeminded governments. Britian of course can call on her huge Imperial colonies to fuel any war effort while the commonwealth includes another large number of countries such as Canada, South Africa, Australia and New Zealand who can send troops in case of war. In the east there is Poland who can help the Allies by waging a two-front war against the Germans. Sadly, apathy from the low countries and Scandinavian powers leads to many like minded nations sitting on the sidelines.


Of course the most telling of these is the United States. Sitting across the Atlantic, once again American isolationism has reared its head. The trauma of the Great War is felt just as strongly in the Americas as it is in Europe and the desire to intervene in what is seen as a European conflict is markedly low. Thus the largest democracy in the world is currently on the side lines watching events unfold.

The Allied desire to avoid a repeat of the Great War at all costs ironically is responsible for pricipitating the current crisis. A strongly worded Treaty of Versailles has pressured Germany and raised popular resentment against the Allied powers. The mainstream success of the Nazis and other simmilar parties is due in part to such heavy-handedness. Equally a desire to avoid confrontation and appease Hitler has left him enboldened, convinced that he can bully the Allies and take as much land in Eastern Europe as he likes. A belated strong line is simply not believed. As such, the outbreak of war is as much a supprise to Hitler as it is to the Allies.


While the Allies have the upper hand in material terms, the fear of a bloodbath has led to a paralysis on the Western front, and a refusal to take the initiative. The massive French defences along the Maginot line leave things at a stalemate and in reality the Allies are quite happy with this state of affairs. Marshalling this half-hearted force into one capable of aggressive attack will take skill and determination. Ultimatly the early stages of the war will have to play to the Allies strengths. A strong defense and heavy fire power are not bad things so long as early ambitions remain modest. The key to long term survival will lie in the hands of the United States. Without the Americans there is no way to match the German industrial output. However convincing this potential arsenal of democracy to join the fight will not be easy. Ultimatly exacly when the US joins will come down to fate. Until then the hatches will have to be battened down and the defences prepared to ride out the storm. 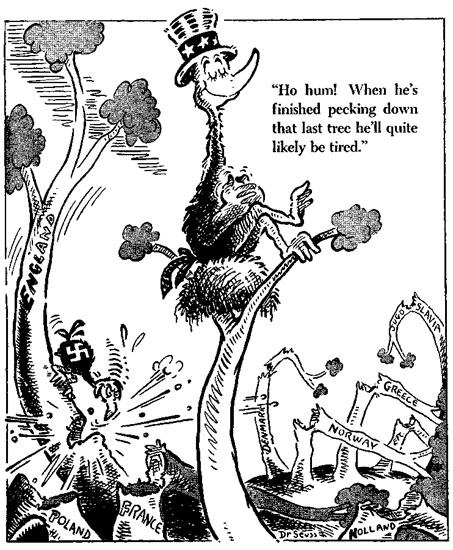